This winter, the sea off of Helsinki never froze over completely. Yet spring feels as unreachable as ever; yesterday the rain turned into unpleasant wet snow. Regardless of the weather, the nights are dwindling. As much as I love light, I am feel the need to say good bye to the long winter nights, which are full of a particular magic of their own.

One particularly special night walk, at the beginning of February, was haunted by this beautiful full moon.

It was just as thrilling to see this rabbit, who was alternating between languid movements and utter, enviable, stillness.

There is also the joy of discovery in the city, when all of the warmth and creativity of urban life is juxtaposed with the dark, dull, winter. One of the most exciting and effecting things I have seen this winter was a show by Flis Holland at Sinne Galleria in Helsinki, which you can read about here.

Composed of tiny, impossibly lifelike models that are gazed at through jewlers lenses suspended on from the gallery ceiling, they are both charming, lovely and ultimately disturbing. One echoed the space of the gallery itself, creating a sort of delicious other-worldly confusion.

The other focused on a home, and unsettling questions arise as the viewer moves through the circle of three dimensional images. What has happened? It blends the adorable with discomfort. We revolved around the piece several times. Still it sticks with me, the mystery, the echo of it.

There was also the thrill of having to participate and actually interact with the pieces. To stand outside the rings was easy; to stand inside was a bit daring as the gallery became crowded. It felt like becoming part of the work.

There is also the strolling through dark streets— and here in the winter in Helsinki they are almost always dark— looking at things shining out of lit windows. Or encountering naughty door knobs…

This door know is a favorite, from the door to Helsinki Contemporary, a ripe fruit whose curves are almost too much for a single hand.

Concerts are also particularly wonderful in long dark nights. On Friday the 13th, in celebration of Valentine’s day, at the end of the Musica Nova festival, where Pedro Carneiro was performing “Shing Kham” (2011, 2013) By Peter Leiberson. I was really this close:

Of course I was thrilled to be so near so many percussion instruments all at once. I also thoroughly enjoyed the piece by Reinbert de Leeuw, “Der nächtliche Wanderer” (2013), which included performers placed in different levels of the Musiikkitalo hall, and unless I am mistaken, a recording of a dog barking.

All of these things come alive at night, reasons to give thanks the overwhelming winter darkness as we shoot out of it into spring. 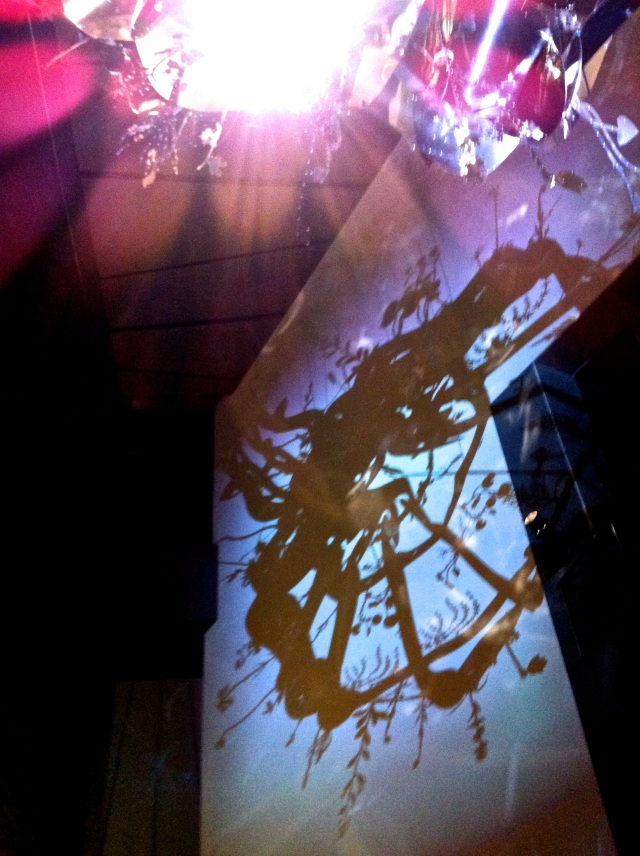 Shadows of the light sculpture inside the Musikki Talo

Musiikkitalo (literally: music building or music house) is one of my favorite places in Helsinki. Not only does it have a wonderful, innovative, and ambitious calendar of events, it has wonderful leadership. Recently I had the opportunity to hear the director Katja Leppäkoski speak and she talked about how they were seeking to make the Musiikkitalo inclusive and open to many sorts of people and interests. I love that it is open to everyone, with free wifi and more generous hours than most Helsinki cafes. It is a beautiful space in which to work. Many of the performances also have discounted tickets for students and people without work (about EUR 7.50– cheaper than a trip to the cinema). And the acoustics, even behind the orchestra, are magnificent; they were designed by Yasuhisa Toyota.

They also get amazing artists in, like Julia Lezhneva who is performing this coming Sunday. I would go if I could! Worth a try, even if baroque isn’t your thing. And if you’re not broke– these tickets are pricier.